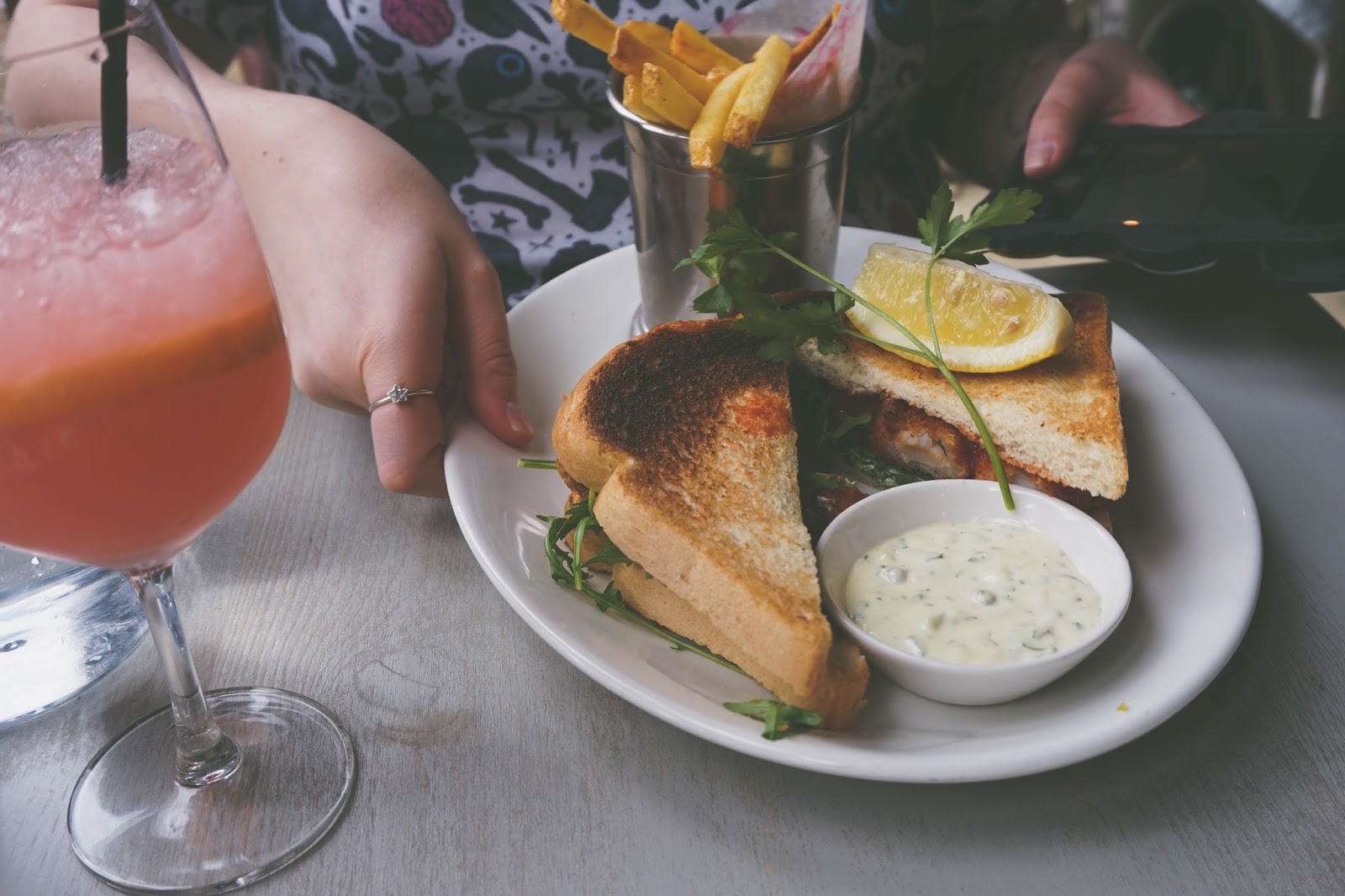 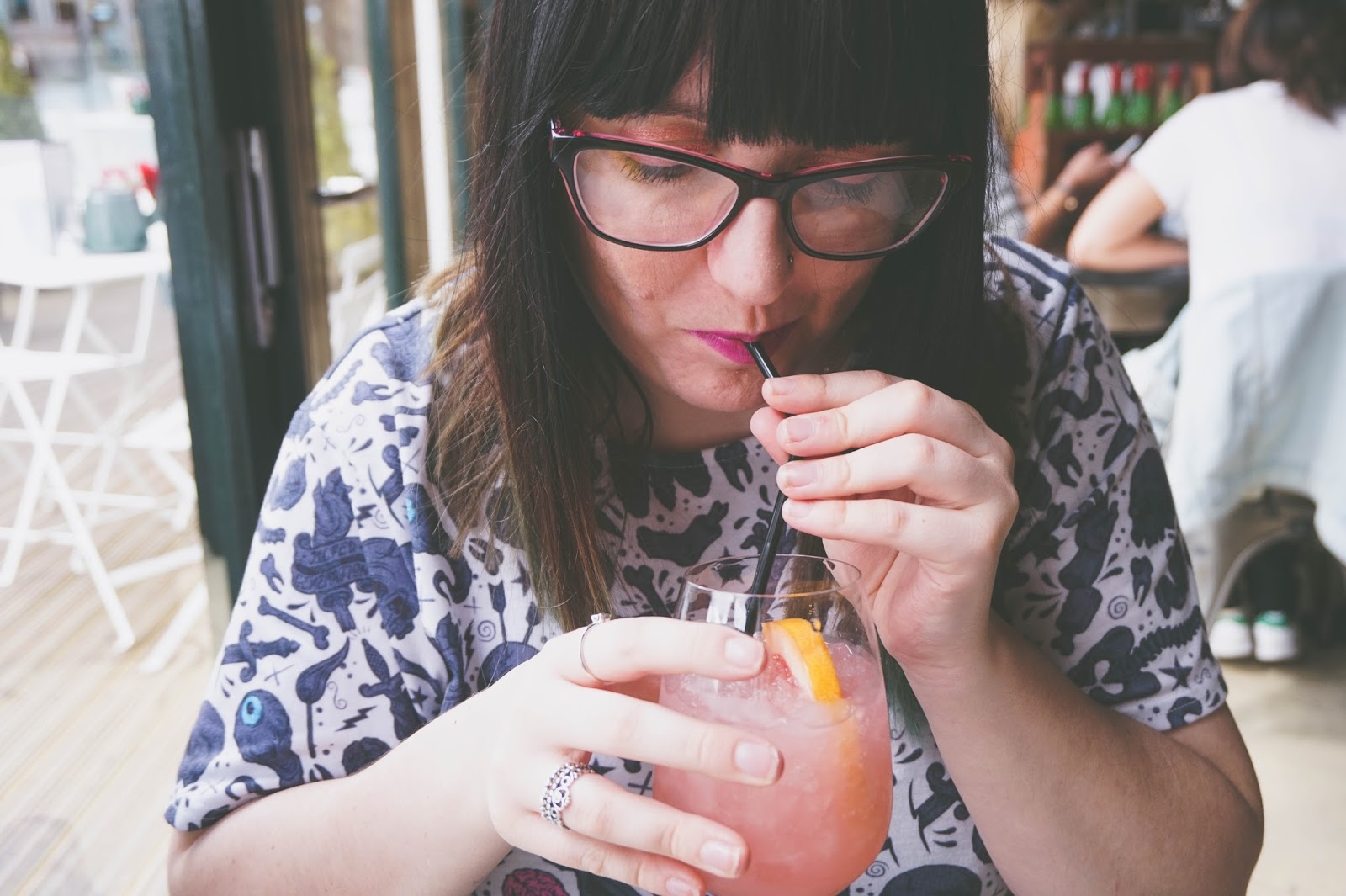 Last Tuesday I met up with Olivia in Birmingham and the very first thing that we wanted to do was eat. We are both pretty picky eaters so we walked up and down the street of food places and ended up at Bills Restaurant. I have already done a post on it but I wanted to do another, and this is my blog, I make up the rules. pls don’t unfollow me
You can read that post here.

Although it was after twelve this was our first meal of the day and as neither of us were driving and I’m always eager to try a new alcohol (one day I will find one I like!) I wanted to get cocktails and we got some so- this was totally brunch! I am all grown up now! A (semi-)functional adult who goes to brunch with their friends!! Next step: find myself a Mr. Big.
We both decided on a Bill’s Pink Spritz which consisted of; London dry gin, rhubarb cordial, cocoa rosa, pink grapefruit, topped with Bill’s pink lemonade. They had me at pink lemonade. I didn’t even know there was gin in it until Olivia mentioned that the “gin is strong in this”. I should read more. It had a real tang to it and I only managed to drink about a third of it, but it made for nice instagram photos so it was totally worth it! I am, however, v thankful that I also got a glass of water. 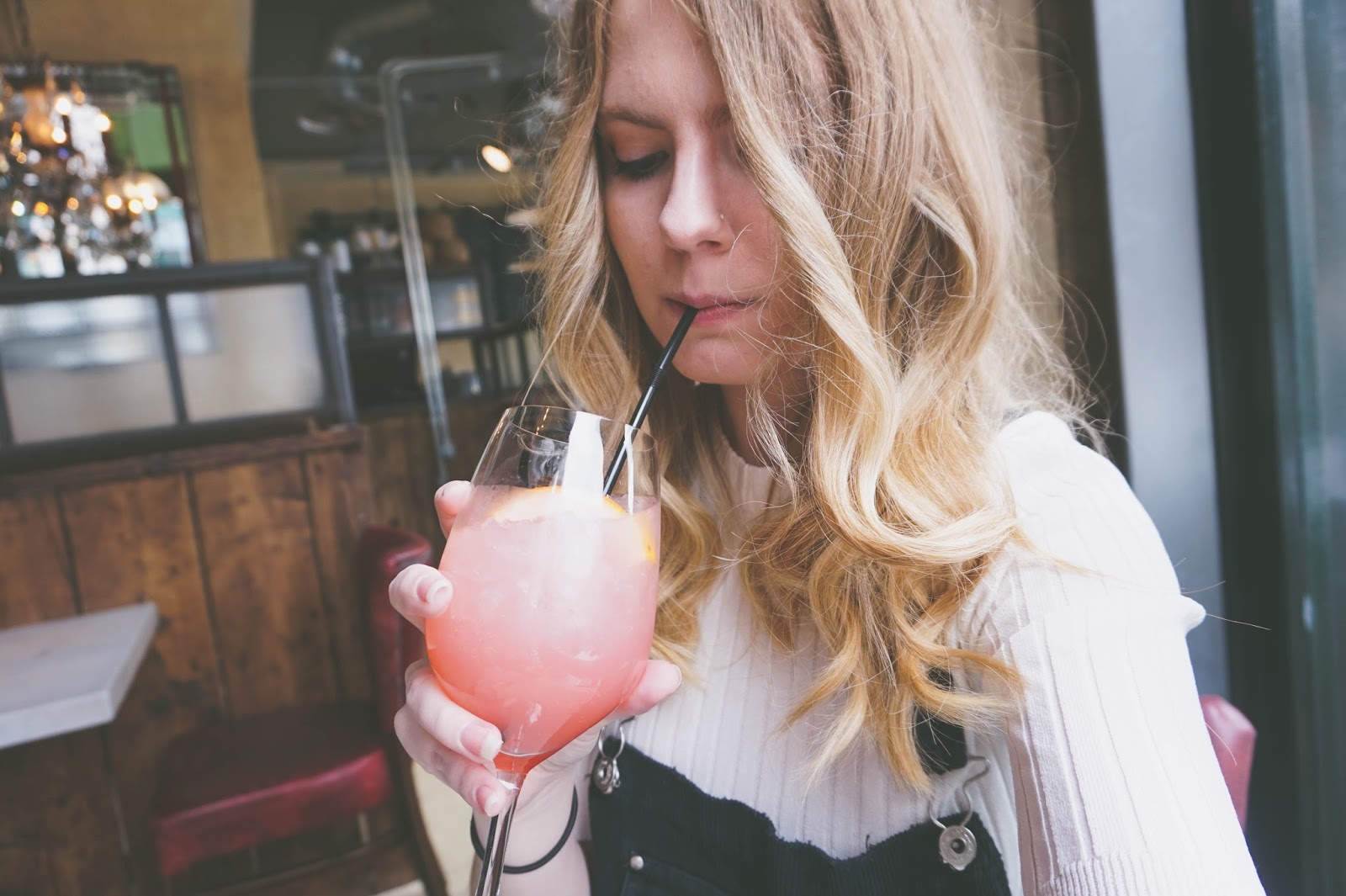 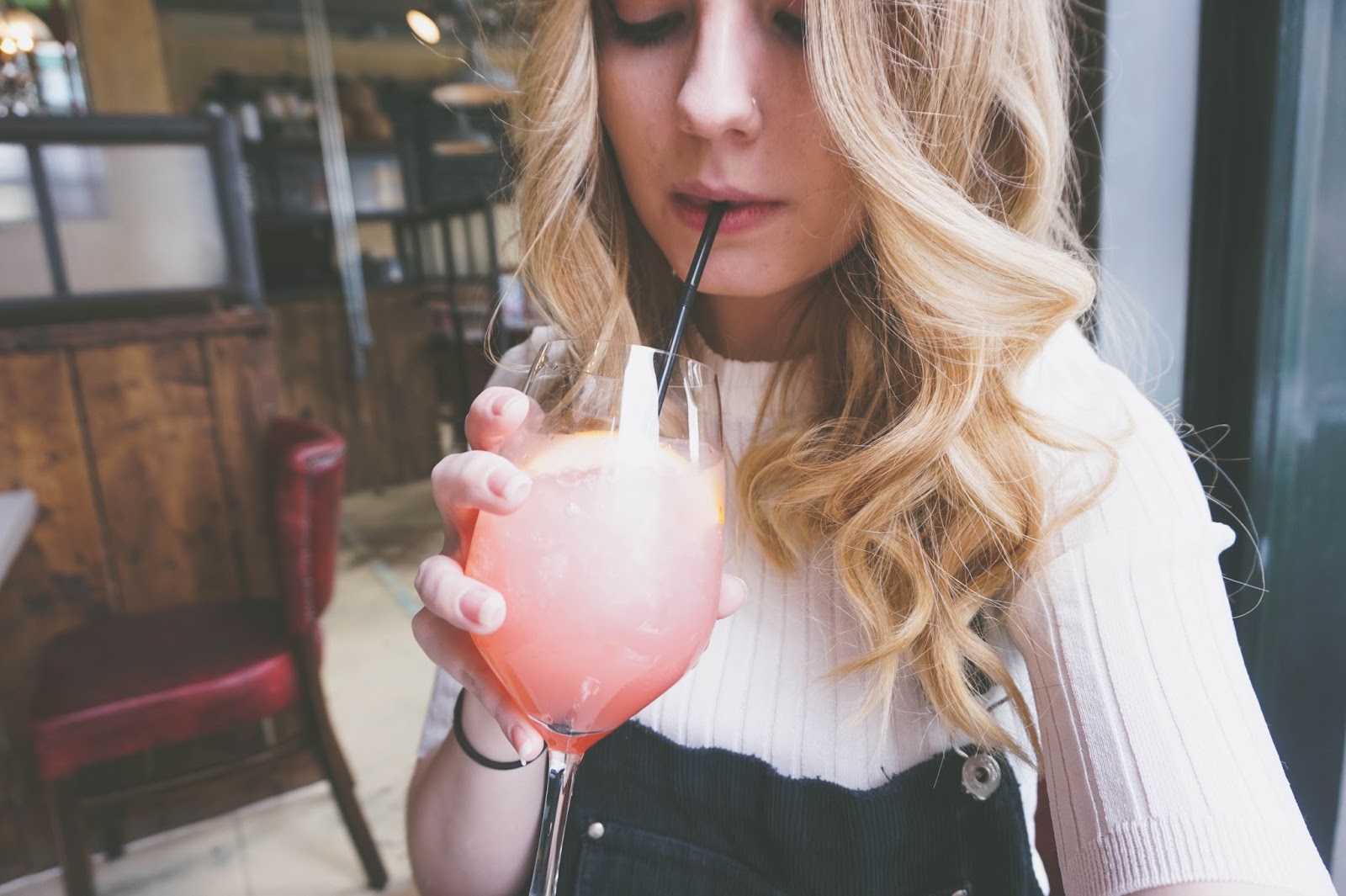 Here are some lovely photos of me attempting to take a nice photo drinking the cocktail and failing terribly. Its harder than it looks!! I need more practise/longer arms.

For food I knew exactly what I was going to get. You might recall that I mentioned earlier on in the post that I had been here before and because of that, I knew exactly what I liked on the menu and what I didn’t like- so when the waiter came and asked us what we wanted I looked them straight in the eye and said “could I have a side of fries…but on a plate….please”. Minimal stuttering. You should be so proud of me. Last time I wasn’t aware that their side of fries came in a bowl/cup/thing but I had the knowledge this time. Always pay attention kids. These are some top notch life skillz.

Olivia decided to get a fish finger sandwich which, I must admit, looked very pretty. It’s always wonderful going out to eat with other bloggers as they’re very patient when I move every single thing on the table round just so I can get a good picture. They know the pain of unwanted napkins and cutlery. They understand- and for that, I am very thankful. I am very thankful. 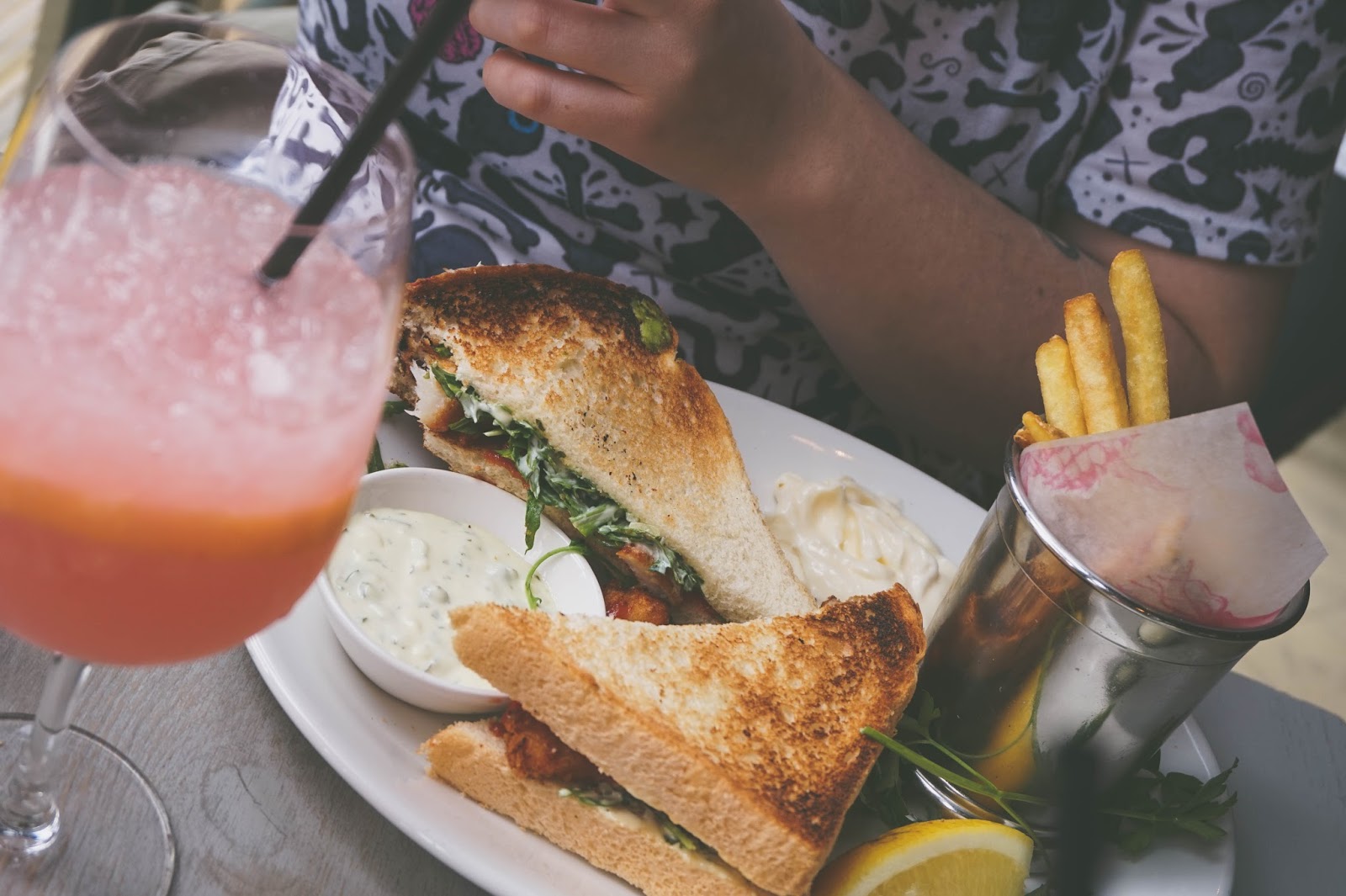 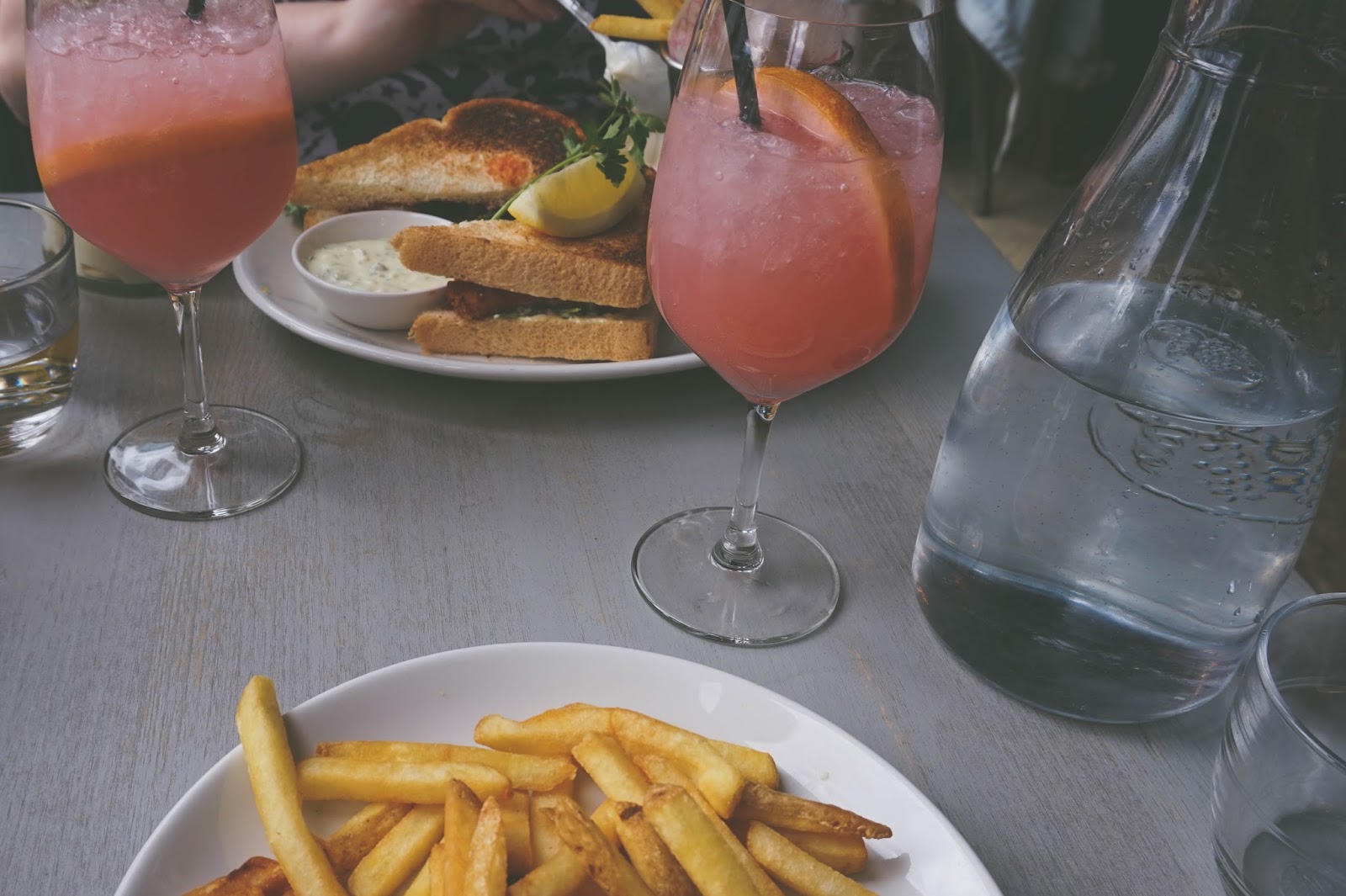 I can’t comment on how the fish finger sandwich tasted (for obvious reasons) (fish is gross) (duh) but Olivia seemed to enjoy it and she had tonnes of mayo which I can imagine only helped. Don’t ask. She just really likes mayo. Apparently people do that.

The fries were good. When I first came here (have I mentioned that i’ve been here before?) it was quick a shock to read that they still had their skin. I personally prefer my fries naked. skin free. It was a huge deal for me because they weren’t something that I could eat but as a part of my new year resolutions I ordered them anyway and then smothered them in salt, vinegar and ketchup and hey look- I lived to tell the tale!
Since then i’ve eaten at a few other places that also serve their chips/fries with the skin on and while its still quite a process to eat them. baby steps hannah. baby steps. any progress is good progress.
The fries here, once you get past the skin, are really nice! They are crispy exactly like fries should be and the potato is always nice and soft on the inside. I enjoyed them a lot more the second time around as they were on a plate and gave me flashbacks to the meals I had in Paris. It was a great snack (and totally healthy! look, potato and tomatoes in one meal!). 10/10 would recommend.

The last thing I have to talk about is the most important course of any meal of the day, the dessert. Now I have never been to a brunch but I assume that they eat dessert, because a meal is not a meal without dessert. For example, at a hotel you can have your full english but its not complete until you have a pastry filled with chocolate from the continental section. I forgot its name but you all know which one I am on about. Its practically the law to finish every meal that you don’t eat at your own home with a dessert. I promise. Anyway, yes, the dessert… we both got the warm chocolate brownie and it was great! 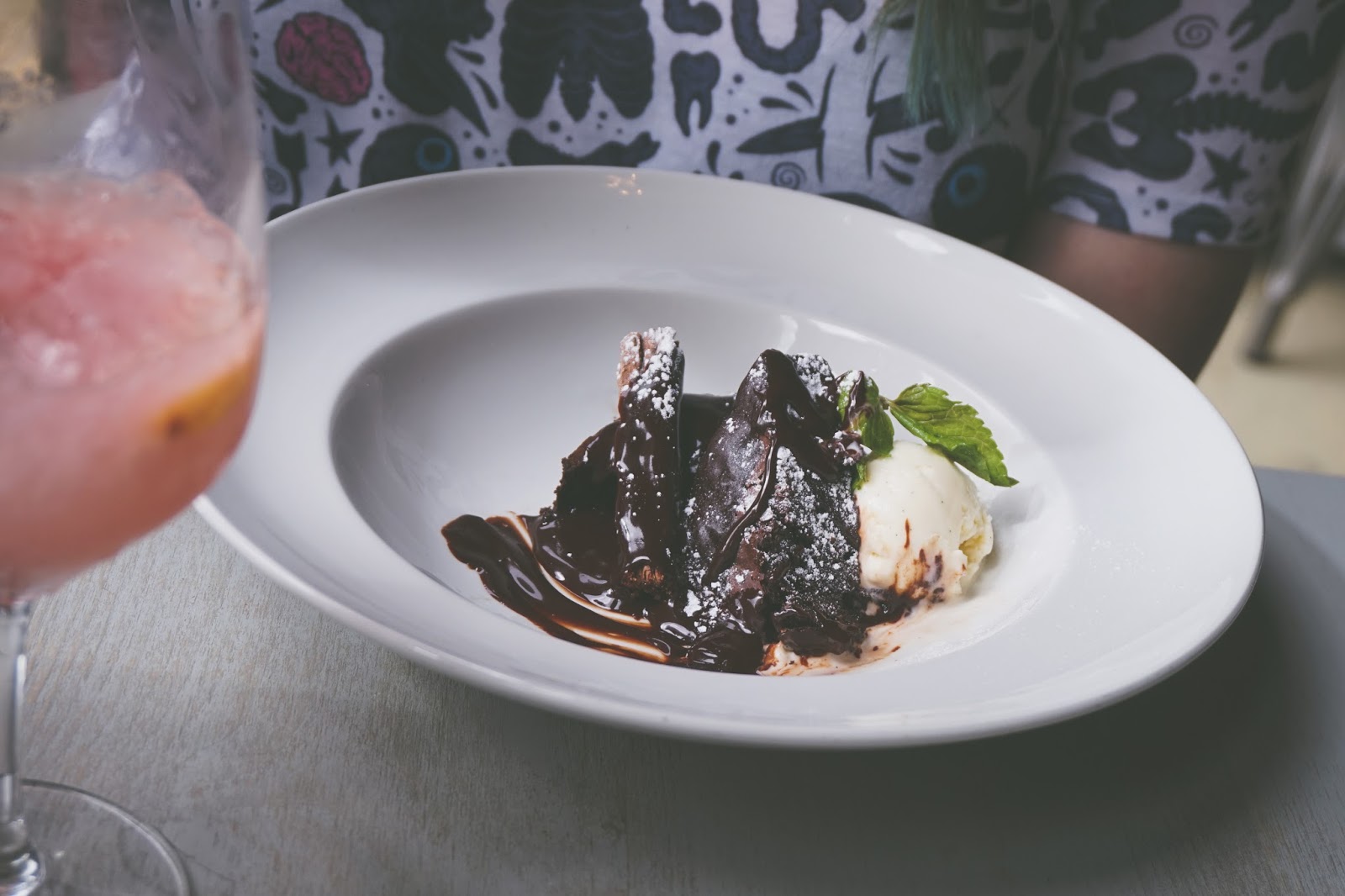 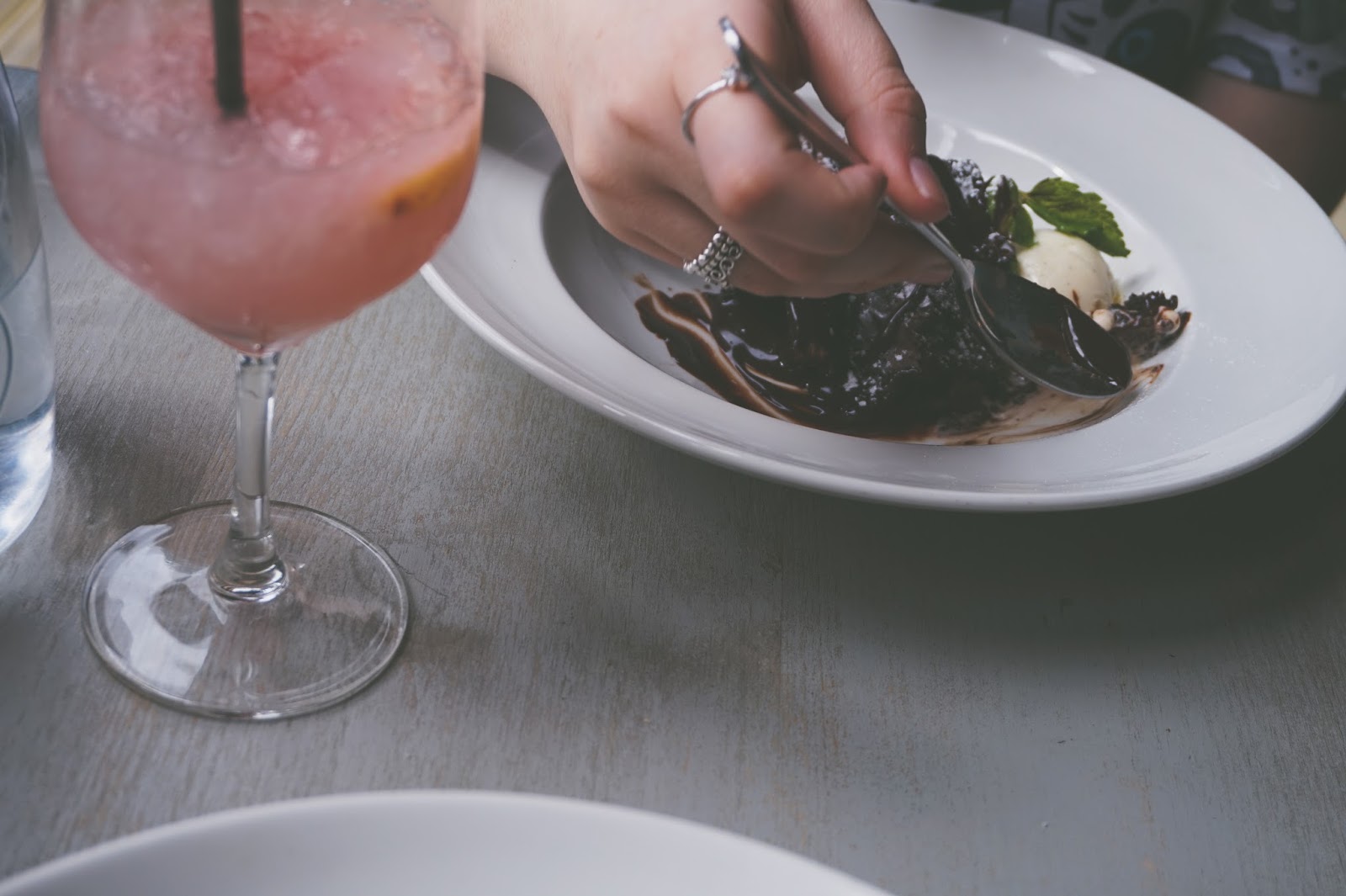 Not only was it very aesthetically pleasing to look at, the portion size was perfect! I had just eaten a whole plate of chips. I mean, I would have eaten it regardless of the size- Olivia just might have had to carry me out. This was my second time eating this dessert here and yes, it was just as wonderful as the first time. I 101% recommend it – and hey, its gluten free! Which is pretty cool. I once made gluten free (&vegan) baked goods for a friend and they did not turn out anywhere near as good as this. She did eat them though.
Its also vegetarian but that was kinda a given… right? 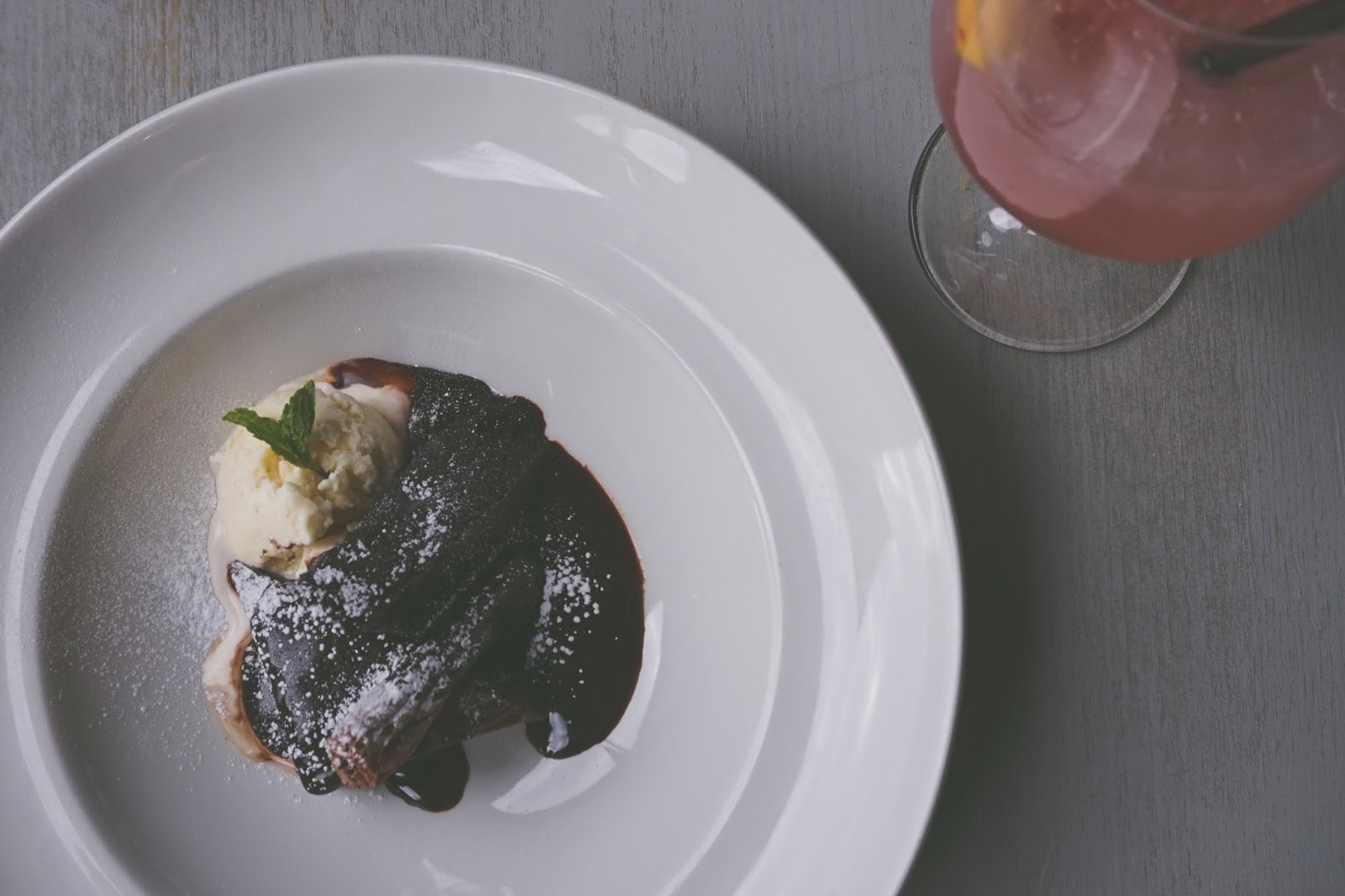 I enjoyed my second visit to Bills. It was just as nice as the last time, the staff were all super friendly and didn’t give me any strange looks when I took 20 photos of my food before eating it. Its quite a different experience to go during the day, rather than the evening, the vibe is a lot more casual but still so so cool and ~totally blogger worthy~~

I still want to try their breakfast- I will wake up early enough one day and on that day I promise, I will be taking photos and putting them on this blog. If you eat food and don’t blog about it, did you really eat the food?

and with that, I do believe that I have said every possible thing that I could possibly say about the food place called Bills. Its nice and if you see one of them, you should totally try the dessert.
Why not visit their website and see if there is a Bills near you.