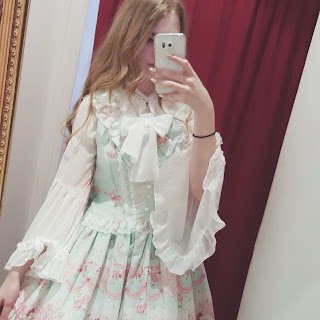 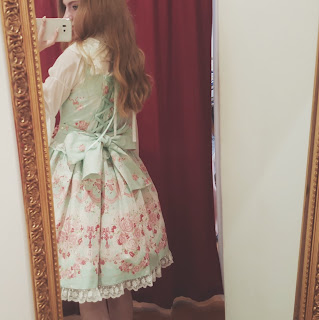 This is the second half of my BTSSB post!

If you haven’t read the first half (that I posted yesterday) you can do so here.

If you watched my video you’ll already know that I got a JSK and a blouse. It turns out that they are a part of the same collection! Which is quite a coincidence.

As I don’t have any ‘worn’ photos since I tried it on at the shop this post is going to be a details post, with lots of pictures showing you…well..the details of the items of clothing I got.

I didn’t take a whole bunch of photos of the blouse due to the fact that there isn’t really much to take photos of. The blouse is very sheer, and I am not great at taking photos of clothing lying down. 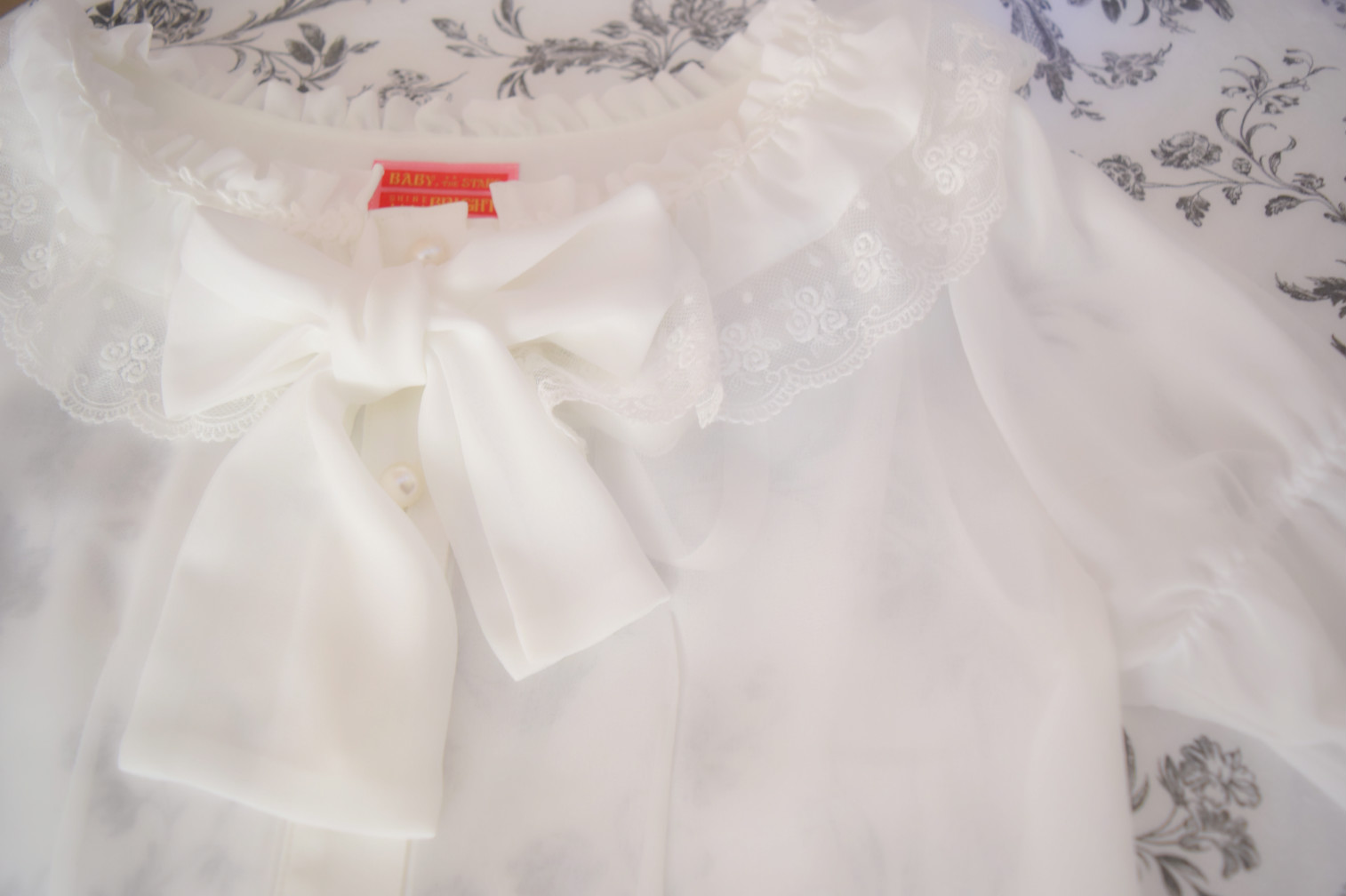 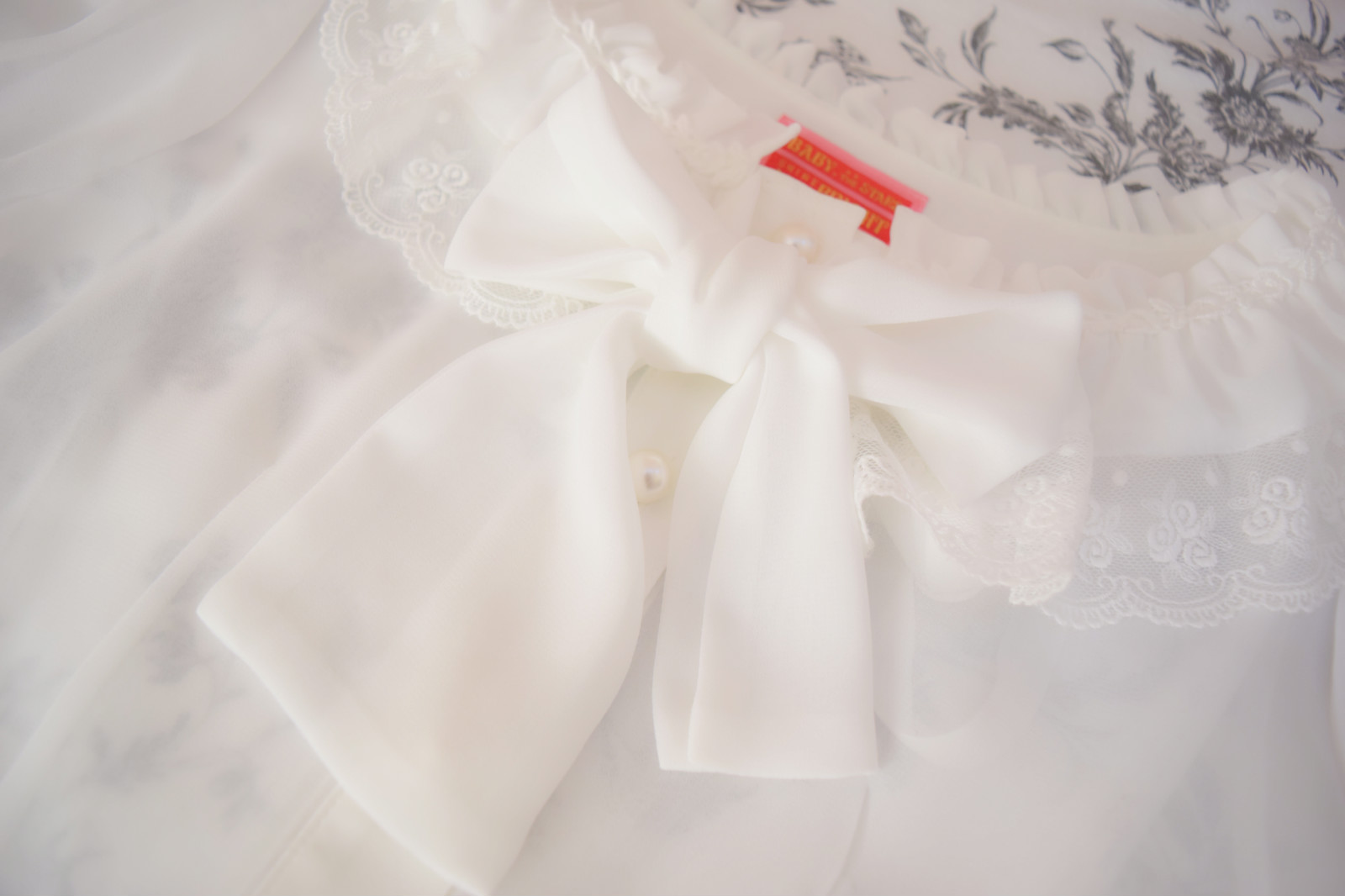 The top of the blouse is really beautiful. It’s what caught my eye and made it stand out from the other blouses. The collar is made out of this really pretty lace and there are pearl-like buttons (which match the JSK)- I’m now questioning why I didn’t realise that they were a part of the same collection, I blame the heat.

There are neck ties (which I tucked away in these photos, my apologies) and a bow which really makes this blouse quite versatile. 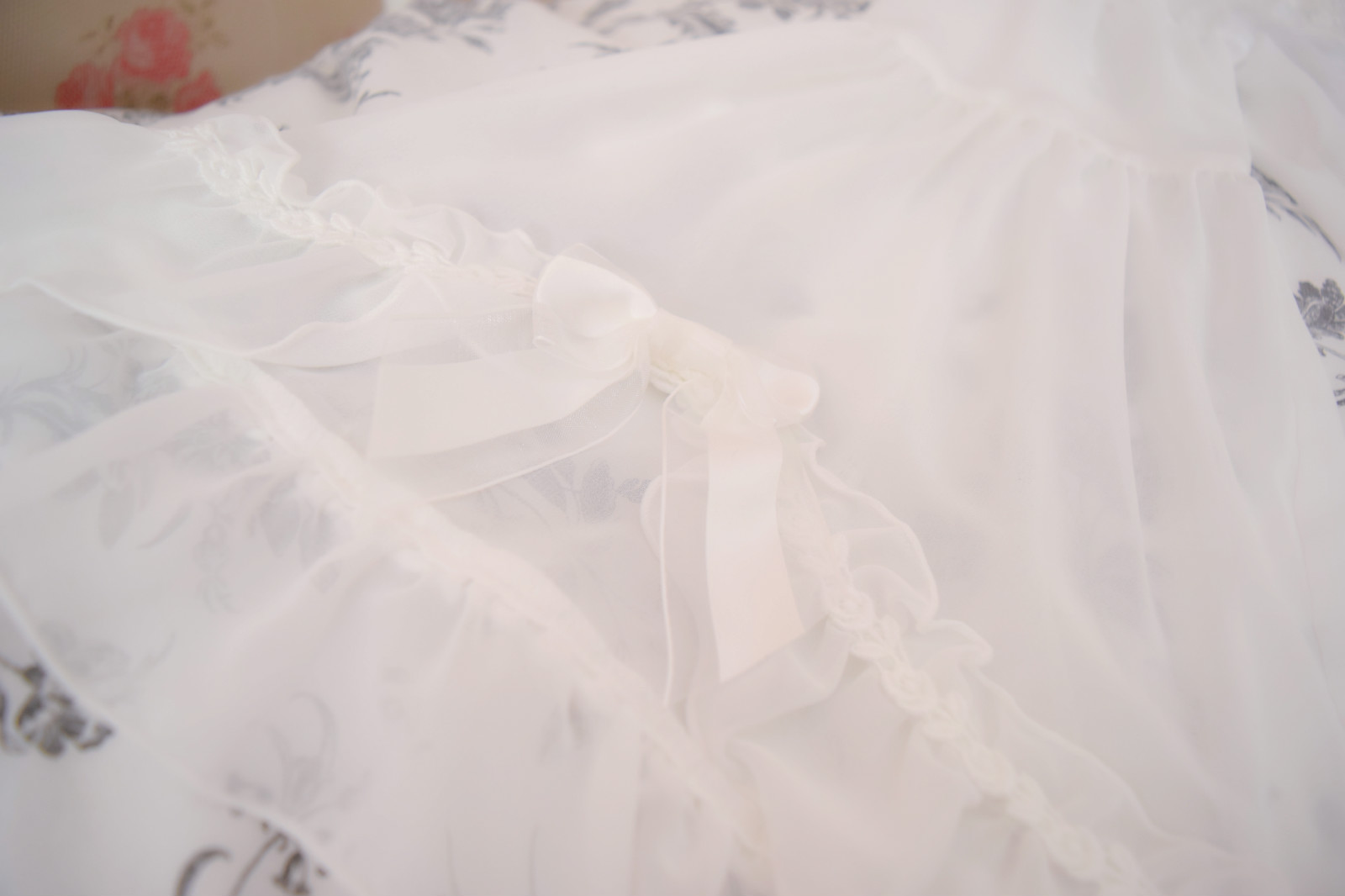 On each of the flared sleeves there is a little bow which really adds the finishing ‘princess’ touch to this blouse.

It isn’t shirred, however that isn’t a problem for me as I find it a tad too big (like a really teeny tiny amount). It could be something to watch out for if you get it though. All in all, I love this blouse. Its definitely the most detailed one I own, as I prefer simple blouses but #noregrats.

I remember seeing this JSK on tumblr in the pink and it was one of those dresses that I instantly liked. I was so happy when I was in store and saw the print- less so when I realised the only one left want in Mint. I decided to try it on anyway and ended up really liking it.

I have an AP OP in Mint and really don’t like it (anyone want it?) but for some reason I liked this one. 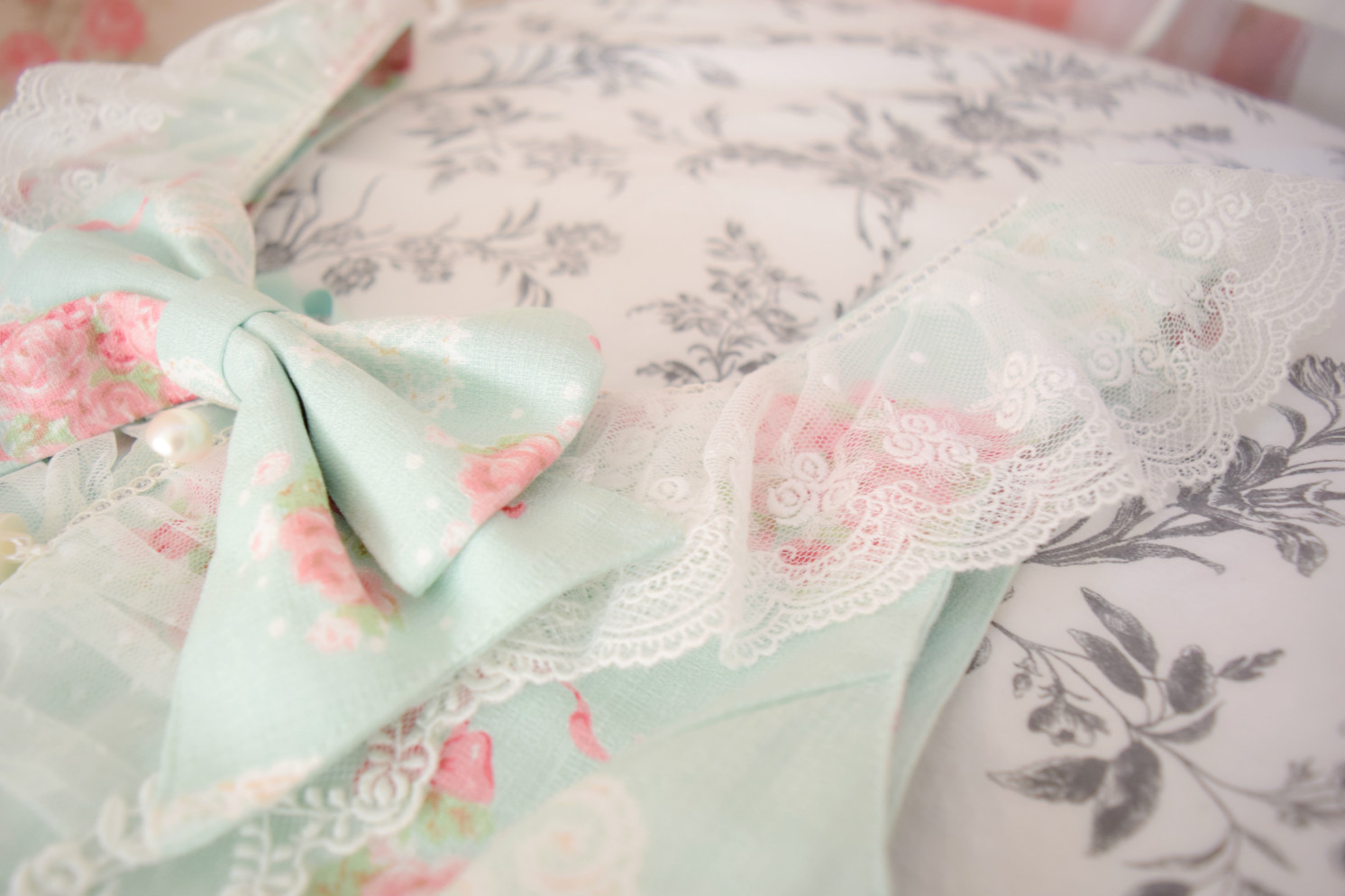 The shoulder straps have lace going over them (the same lace as the blouse!) which I really like, if I were to wear this without a blouse- then my arms would have a tiny bit more coverage which as a person who doesn’t like their arms, I appreciate. The bodice is probably my favourite part of this dress, it reminds me a bit of a corset? 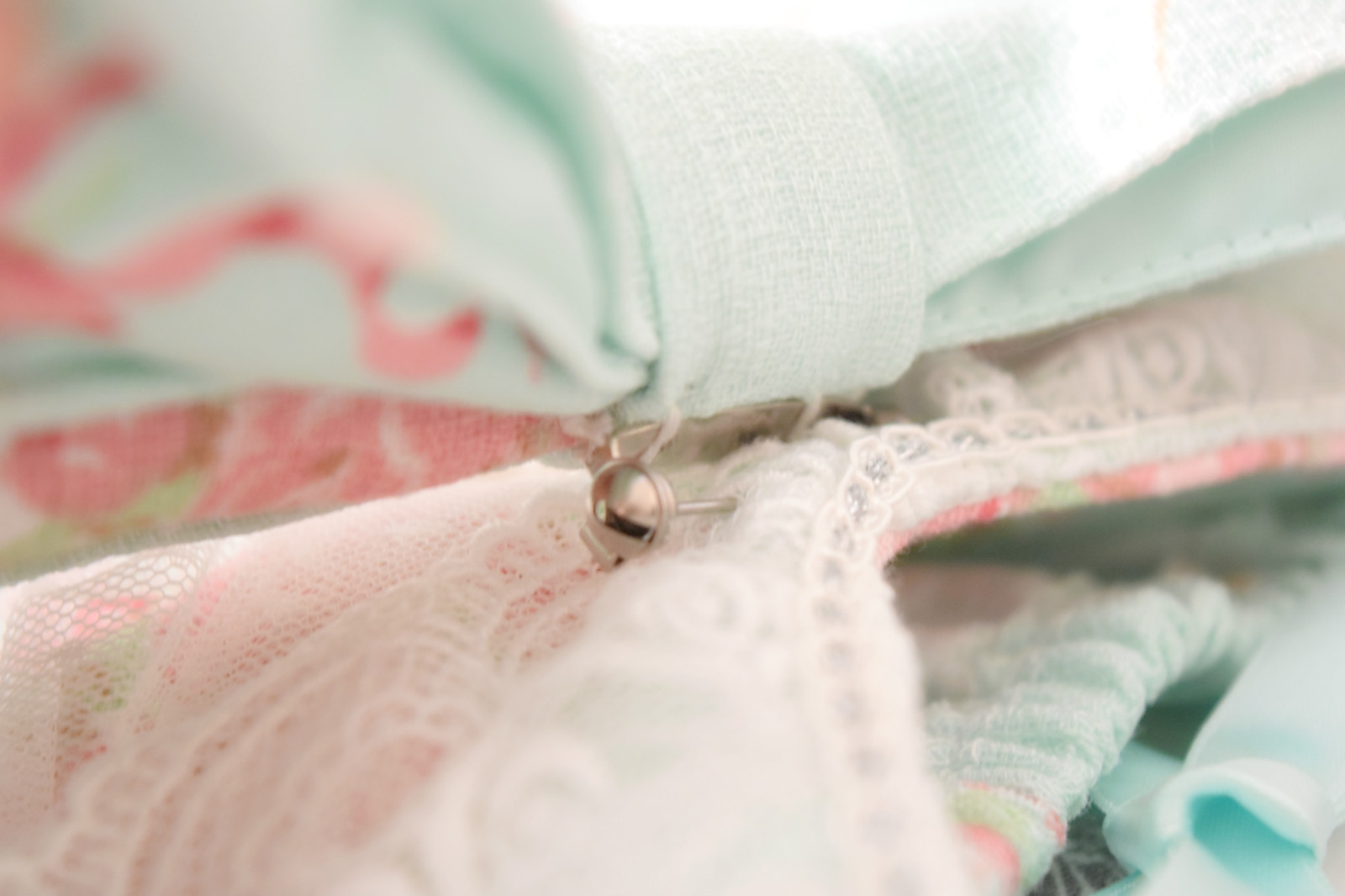 The bow is detachable! Which is always good! (I’d probably detach it and use it as a headbow). 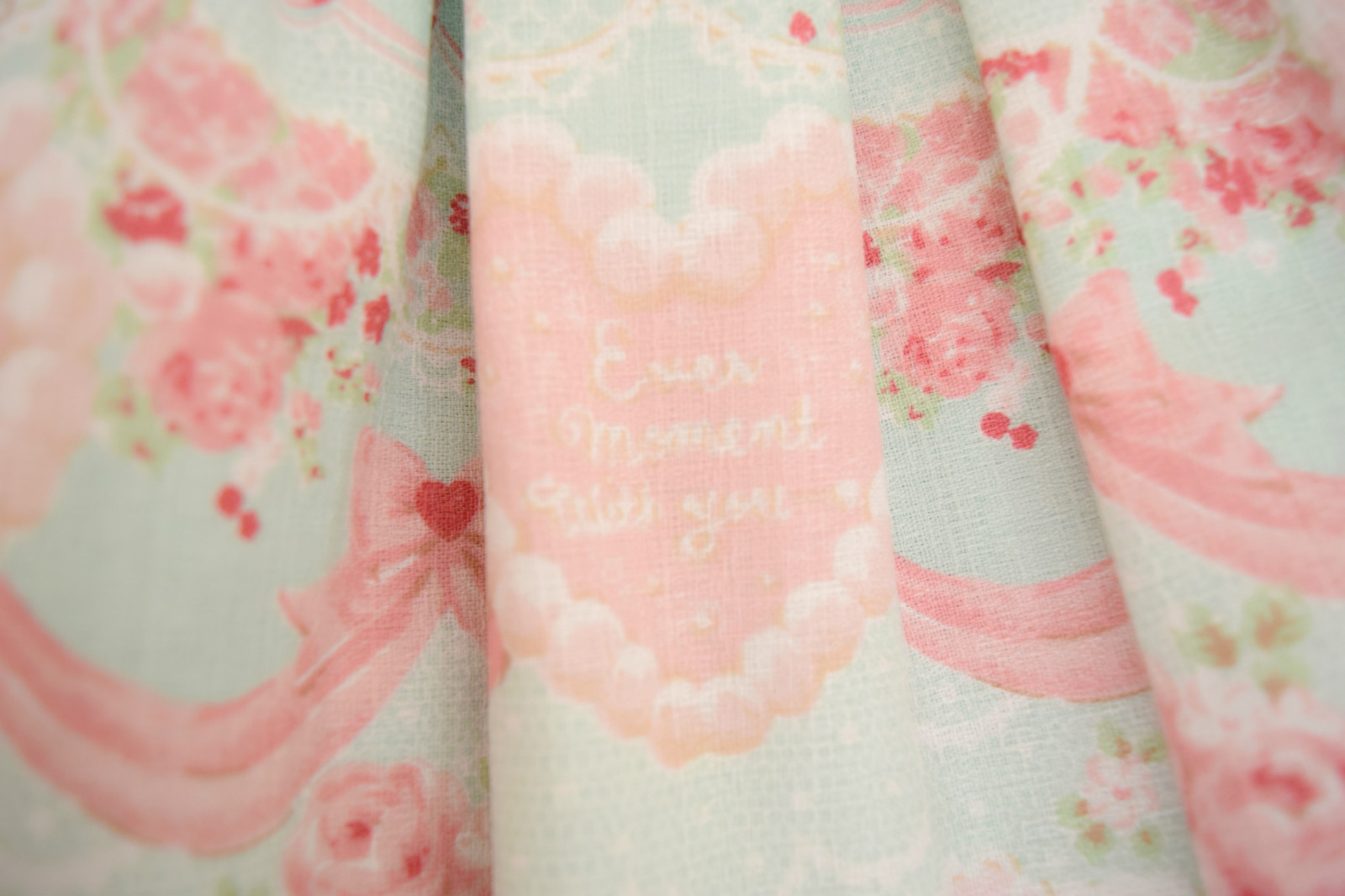 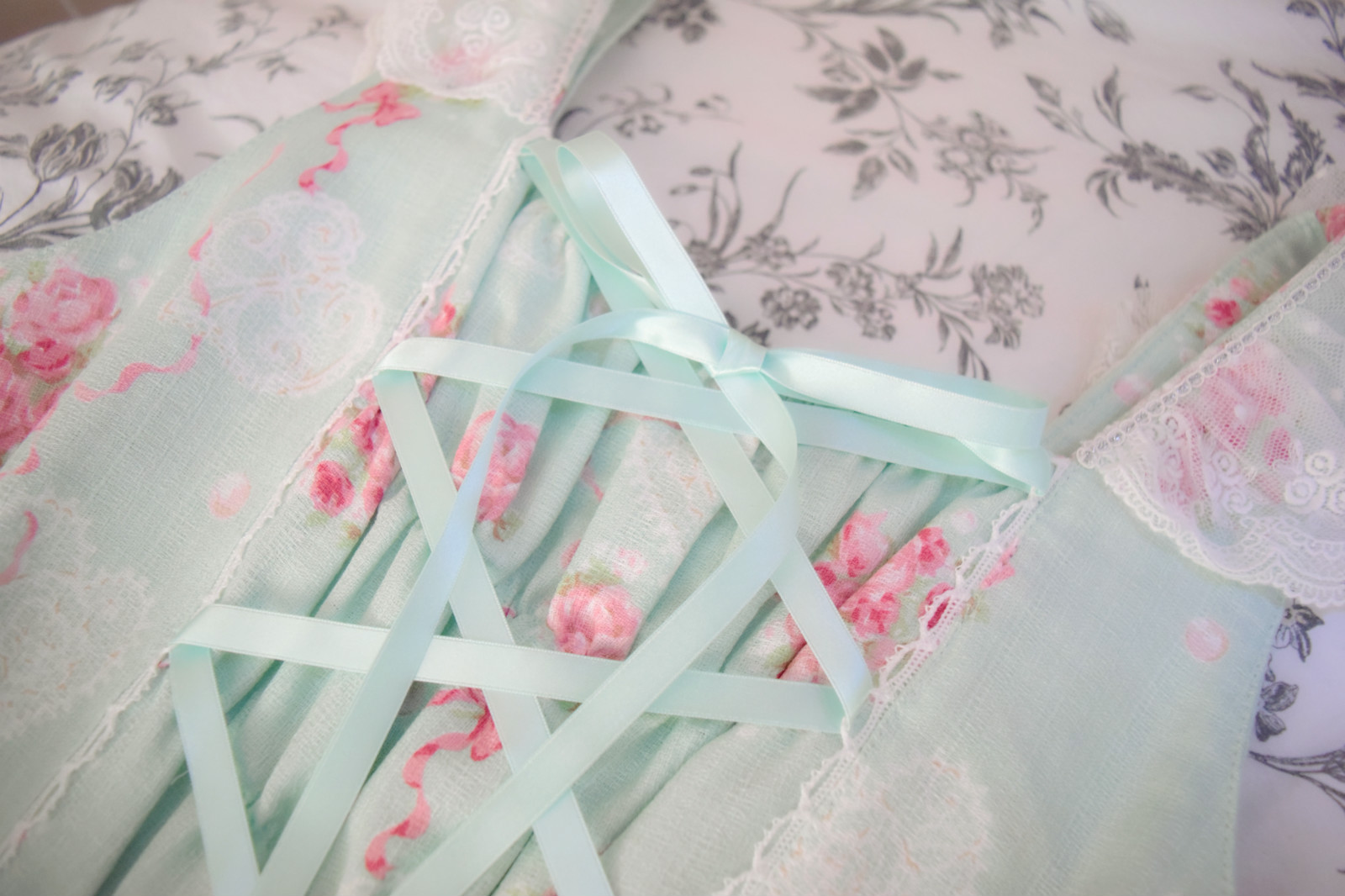 The back of the dress is shirred and there is also corset lacing however it’s done using actual lace which is probably my least favourite thing. I prefer when it’s more like APs Dramatic Rose as i’m less scared to break it. 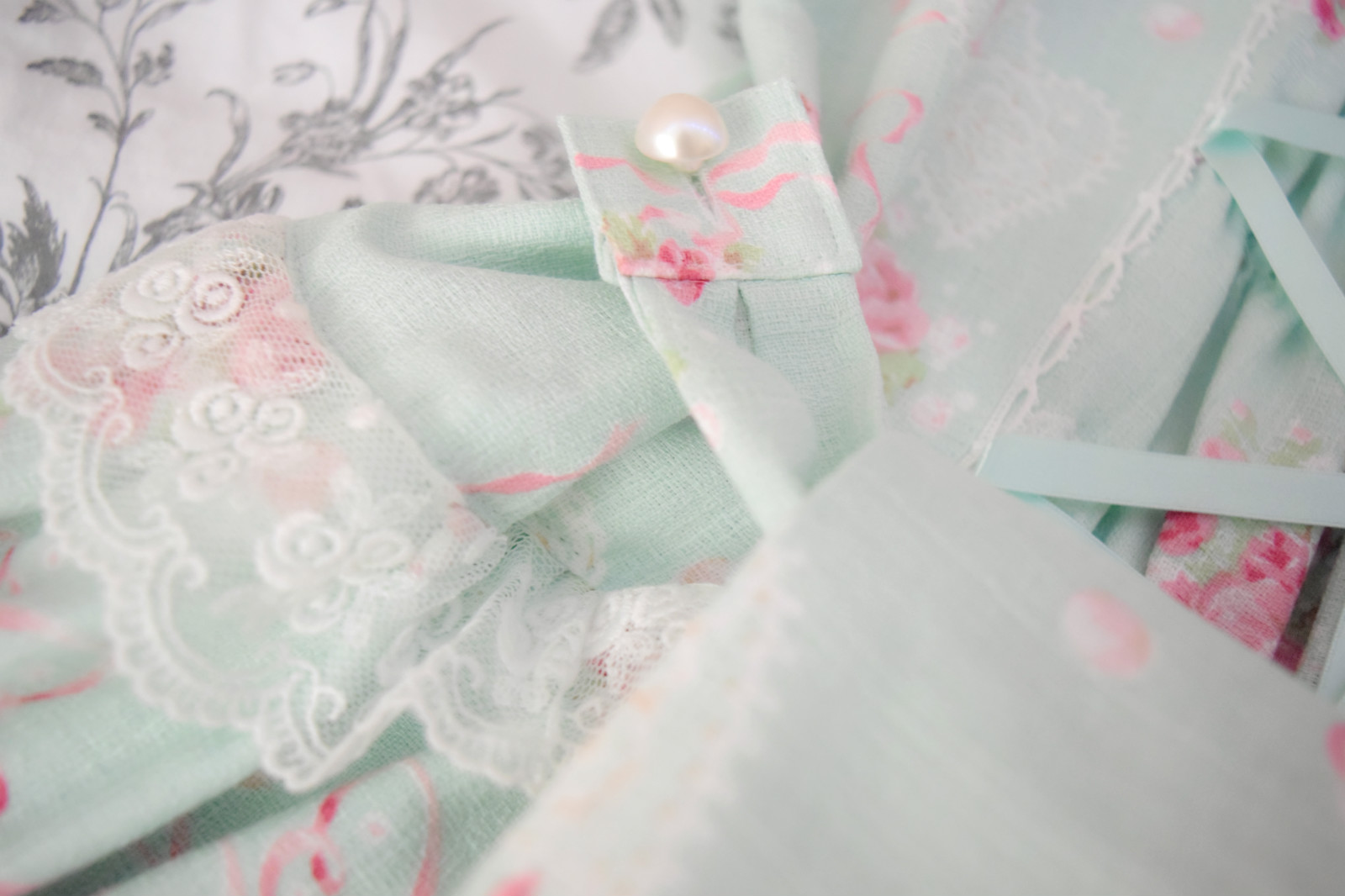 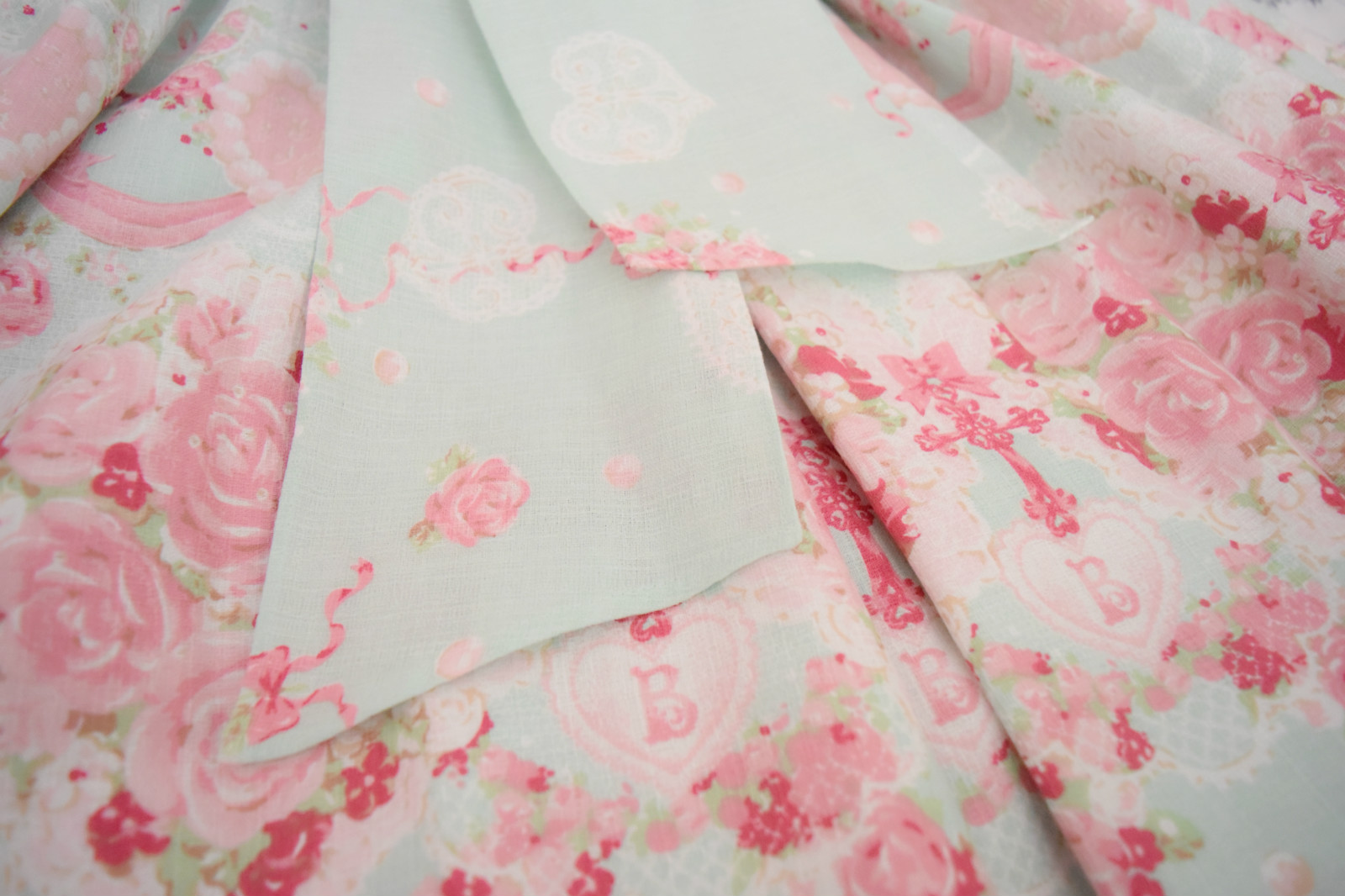 The waist ties are detachable. 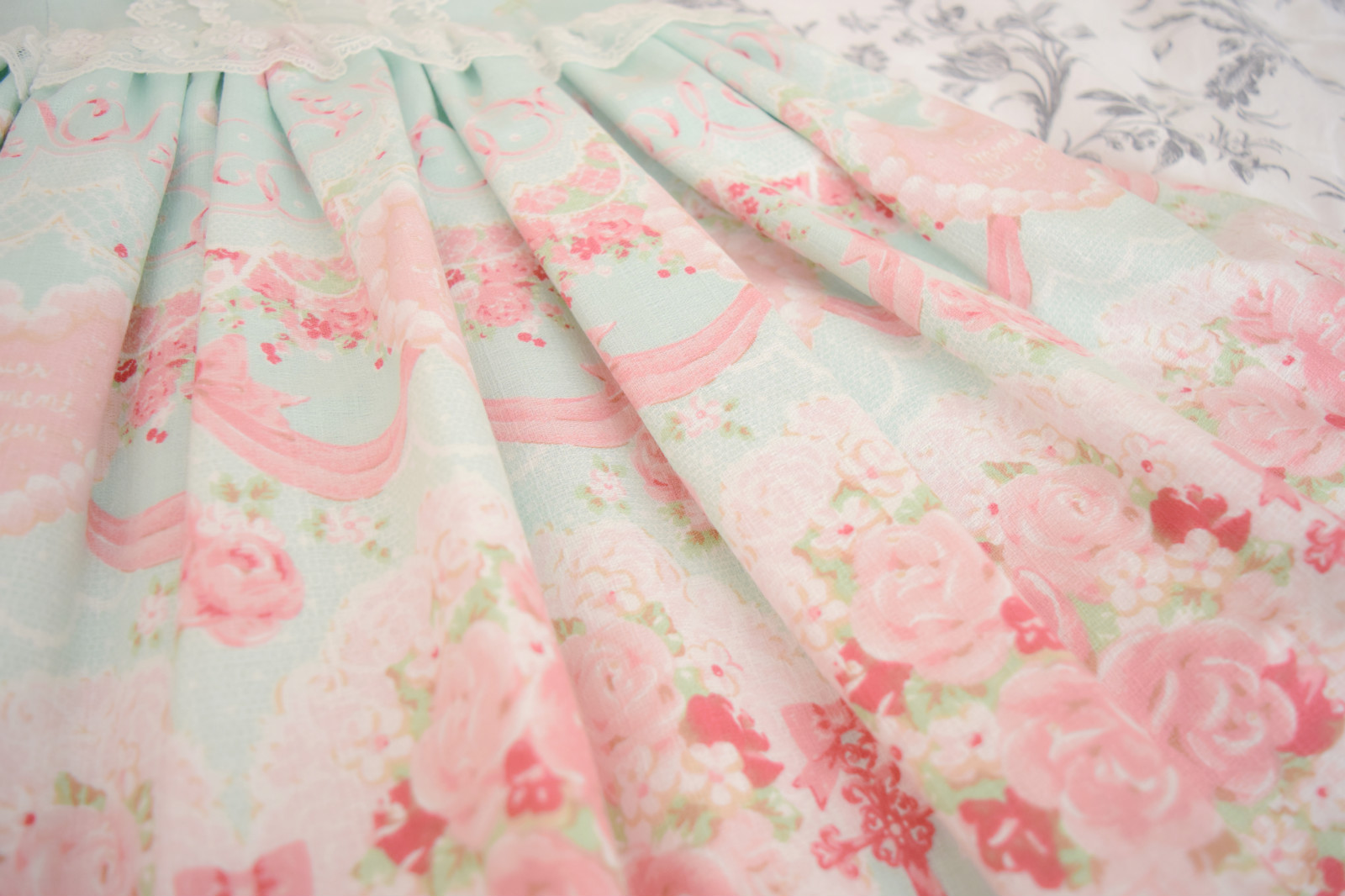 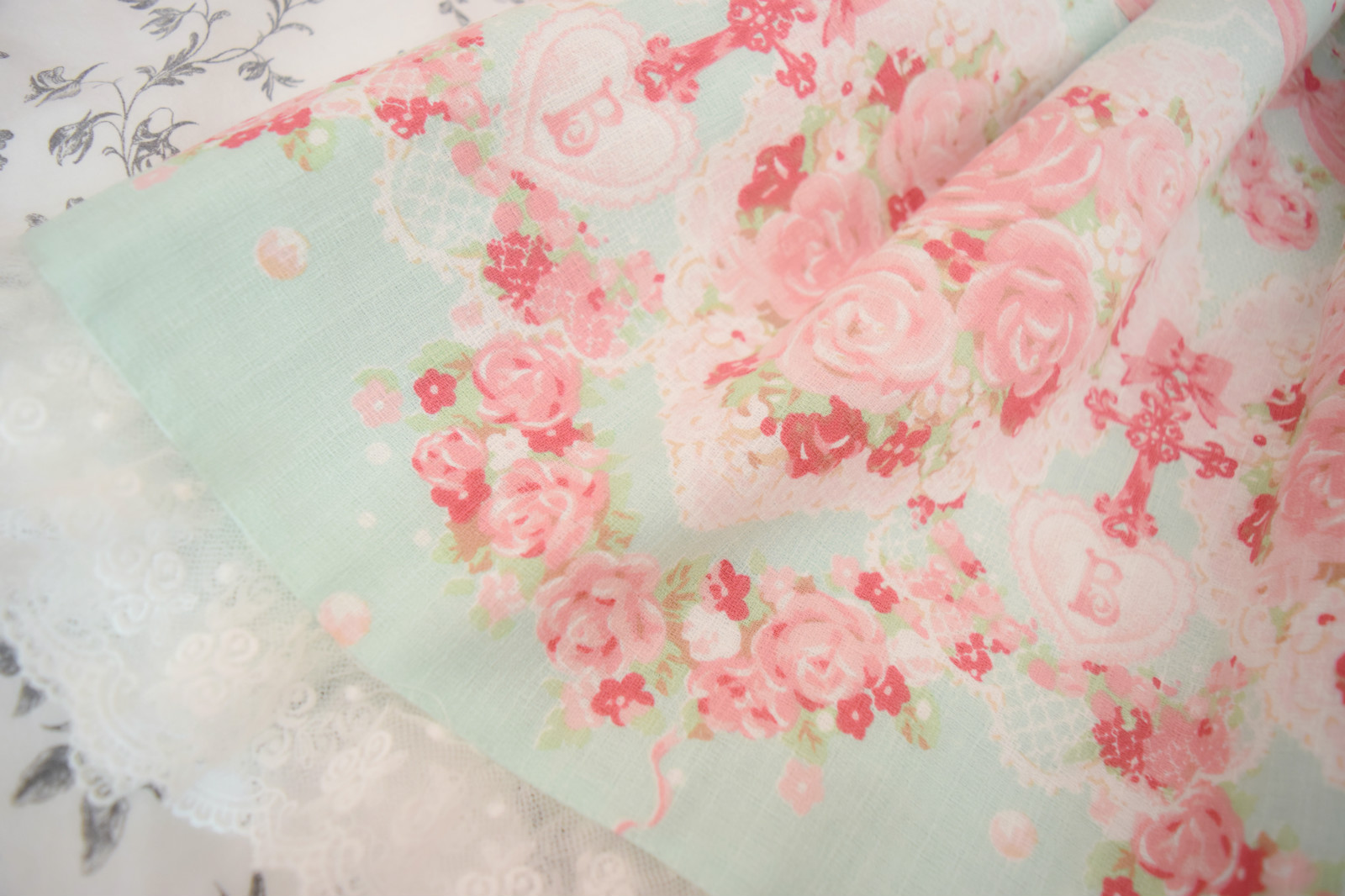 and last but not least- the print is g o r g e o u s, and I don’t use that word lightly. There really aren’t any words I can use to describe it, which is why i’ve used so many pictures.

The bottom of the dress has the same lace used throughout on it, which add a nice bit of length.

I really like these two pieces and i’m really happy to have them be a part of my lolita wardrobe. Please excuse my terrible commentary, i’m the kind of person that either likes things or doesn’t and finds it hard to explain exactly why. Also despite actually loving this fashion style for years- I don’t know all the technical words and I probably frustrated a few people with my terrible explanations.

When I re-visited Baby on the last day they had new stock and there was an aatp jsk which I regret seeing as I can’t get it out of my head.

Let me know your thoughts on what I got!

–
H
ps. I still want to get this JSK in Pink- so if you see it anywhere, let me know?

What I got from Baby, The Stars Shine Bright Paris
Autumn GRWM