When I was younger, perhaps 13/14, I made a little list called ’20 things to do before i’m 20′ and as I am nearing the last year of my life as a teenager I thought I would use that for today.

this list existed on one of my blackberry phones and the first one is lost while the second is password protected (and guess which dummy forgot the password).
I have spent the evening looking through every single memory card that I own and I managed to find a screenshot of the first half of the list! 10 items! Why I didn’t screenshot the second half I will never know.

Go to a concert

Date at least one person

(Why I wanted to do this, I have no idea)

Meet a person i’ve been wanting to meet

(While not the person I had in mind when I wrote that, I did meet someone I really wanted to meet)

Go to Edinborough or Glasgow

(Another where I literally have no idea why this is one of the things I wanted to do?)

and there is my bucket list – I think its really quite obvious that this was written by a very young person?
I gave up on making bucket lists when I decided to just focus on whats happening right now, and focus less on what I want my life to be in *insert numerical value here* years.

Im pretty sure one of my goals was to visit my penpal in France, and then visit Paris. I have now done both of those things. Another to learn French but…yeah……did not do that.

If I were to make one today it would probably involve going to a few more countries, learning a language or two, being more adventurous with food, being more independent
and to maybe, one day, feel like 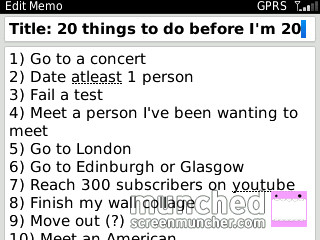 I currently have a giveaway going on to celebrate two years of blogging!